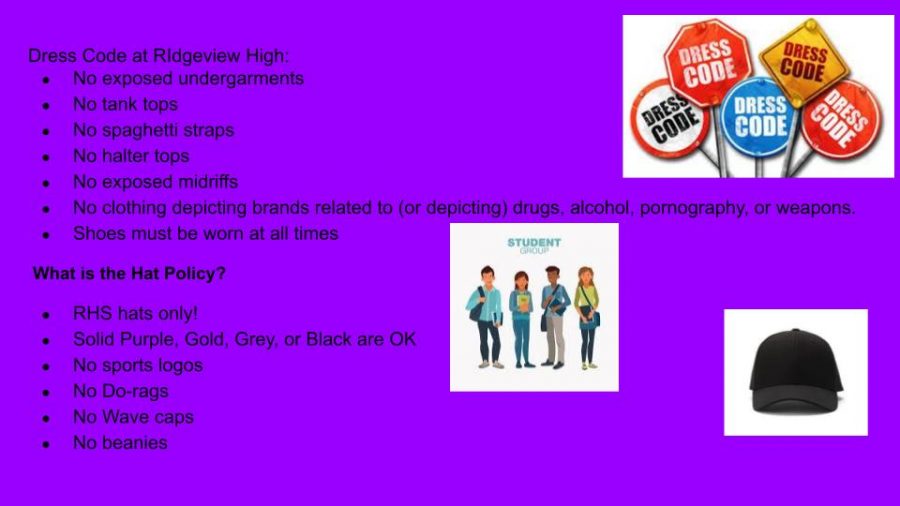 The graphic shows the dress code for of Ridgeview High School.

Dress code has been a big thing throughout the years for students. Abigail Renardo, a Junior  attending Ridgeview High School had an incident earlier this school year . According to Renardo she was wearing a blouse showing her shoulders and her teacher stated, “You’re distracting the boys” and immediately called the Dean. This wasn’t the first incident she had with the dress code, but she was shocked by her teacher’s response .

Renardo strongly agrees that the school dress code can be  sexist towards girls because they get sexualized by the way they dress. She believes the dress code isn’t for the students, it’s more for the staff and teachers because the students don’t pay attention when girls wear something that is “distracting”. Dominick Elijah,  a Junior at Ridgeview High, says he never had issues with dress code but has witnessed his female friends get dress coded.

According to Elijah he thinks the dress code,  “ can be useful and that it should be a thing it just has to be enforced the right way”. Elijah strongly feels that dress code should not be this much of an issue because there’s more important things to worry about.  He states, “ If you look at it in any kind of way, YOU are the problem ,” because the way students dress shouldn’t be an issue as long as it’s not overboard.

Bein Reslome, New Co-Dean at Ridgeview High School, states that the dress code has been the same throughout the years the policy hasn’t changed. Reslome believes the dress code is fair and does not see an issue with it. He believes it’s fair between girls and boys because they have differences and certain things girls wear wouldn’t necessarily be worn by boys, so the dress code applies differently. Resolme also states, “ I wouldn’t change anything, but if it was up to him everyone would be wearing the same uniform, suits and ties”. He says the reason there is a dress code is to have boundaries. Without those boundaries students would go past the line and dress inappropriately that can cause distraction to other students. The positive outcome has been students dressing appropriately and following the rules. When they get dress-coded, Resolme states, “ They come back and dress appropriately afterwards” .