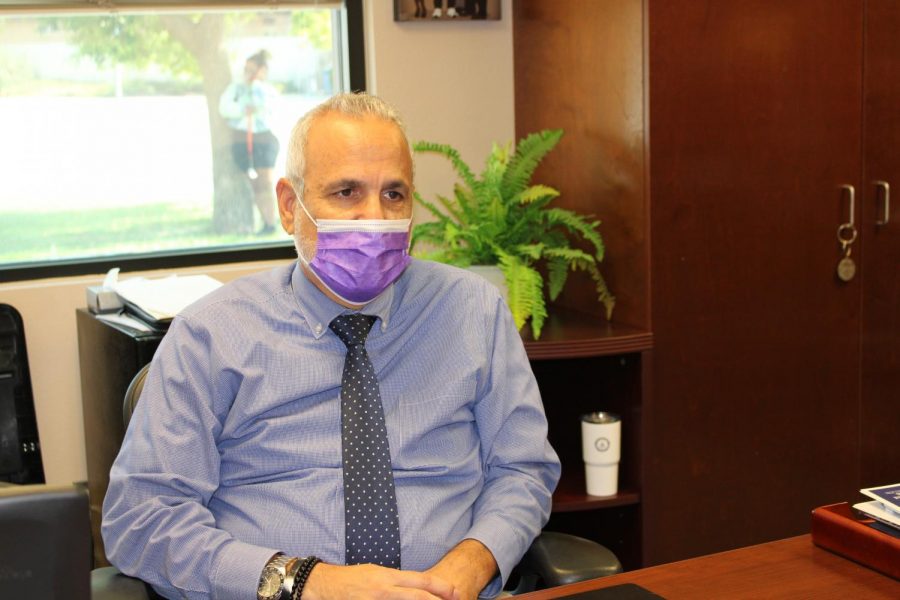 Principal Roger Sanchez poses at this desk in his office at Ridgeview High.

Principal Roger Sanchez’ expectations were set greatly when the new principal of Ridgeview joined the school. A school with great staff and pride is what he received. When asked about expectations Principal  Sanchez says, “I like to see cohesiveness around the school.” He expects the school year to go well and hopes everyone slowly gets comfortable. Principal Sanchez’ favorite music is 80’s music including Micheal Jackson. His favorite part of a school day is when he walks around the school and sees the teachers including the students during lunch. “I enjoy meeting students and staff everyday,” he adds.

Sanchez has been wanting to join Ridgeview, he says he has heard great things about this school. He was inspired by his father who was a hard working person. “My father has accomplished a lot, I’m proud of him.” Before being Principal he was once part of the Air Force. He was stationed in Brandenburg Germany, Scott Airbase Illinois, and in London England. While in the Air Force he always liked sports and thought it was the easiest way of teaching and loved it. Once he came into the education field he first worked at Stockdale High school then Bakersfield High school, and here at Ridgeview. Some inspiration he has for students is to get involved as much as possible, make friends and surround yourself with positivity.

When new Dean Bien Resolme joined Ridgeview High he anticipated a school with rich culture including pride and positivity. When asked how he expects the school year to go he says “I hope kids get back into the groove of school and be helpful towards one another.”

His role as Dean is Student Behavior and Support. Every day when Dean Resolme comes into school he enjoys seeing the secretary including staff and talking to students. Prior to working in education Resolme worked in the navy, after the Navy he worked in Information Technology. Once he left IT he joined the education field. Before joining Ridgeview he worked at East Bakersfield, West High, and Arvin Highschool. When he worked in IT, he enjoyed teaching others, which caused him to join the education field. He also enjoyed interacting with students. He chose to join Ridgeview because the role was open and his wife Jennifer Resolme was head of the Drama Department until last year.

Jennifer Resolme is also an inspiration to Bien Resolme. When asked about a song that would be the theme song of his life,  Resolme says, “These are the days”, by Billy Joel. Some advice he has for students is,  “Get involved, be surrounded by positivity.”