What Happened To Fog Delays? 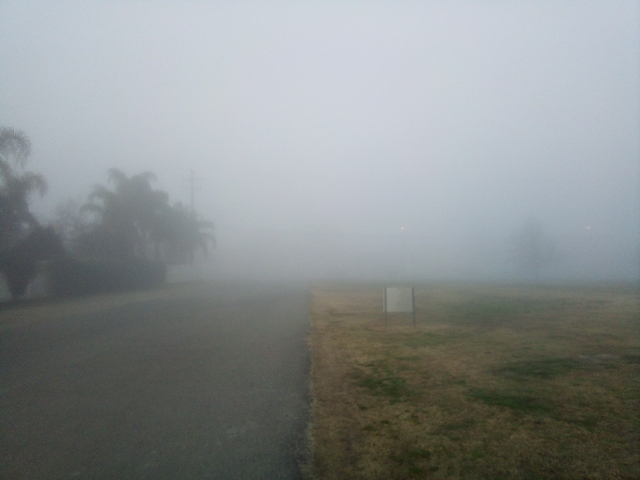 A dense fog blankets the area, limiting visibility to just a few meters.

Fog delays were like sweet candy to children. Students remember fog delays for allowing them to sleep in late. Unfortunately, these memories seemed to happen long ago. The Kern High School District hasn’t experience fog delays for the past couple of years. How have we not experienced fog delays in so long after all these years?

Fog delays were created to prevent school buses from driving under unsafe conditions with children attended. Kenny Seals, Director of Business Administration of Kern High School District who works with the Director of Transportation, is very familiar with fog delays in the district. Kenny Seals has been living in Bakersfield for 20 years. “I am in my second year as a Director of Business Administration of Kern High and am in my twentieth year in Kern High School District”. He recalls the time his school had fog delays as a child when Bakersfield experienced heavy fog. He describes fog delays being more frequent during his 10 years of living in Bakersfield. “Fog delays were a lot more common in my first 10 years in Bakersfield. It was not uncommon to have two or three fog delays each year”.

Kern County hasn’t had any fog delays since the winter of 2016-2017, and only saw a few delays at that time. Seals states the Director of Transportation in coordination with other school districts are the ones who discusses and takes care of the fog delays for the whole district. He explains how fog delays are usually scheduled. “Each school banks eight hours of time that can be used for fog delays each year (ie. 4 two-hour delays).” Fog delays are determined and announced the morning of a foggy day. When schools ends up with banked minutes left, they are used for early outs at the end of the year if it is not used for fog delays.

But the real question is, how come we don’t experience fog delays anymore? According to Seals, Bakersfield has been clear from a foggy weather and there is a reason behind that. Seals states, “Fog seems to be a lot less common and dense in Bakersfield than previous years. Perhaps this is due to more development, less agriculture land nearby, and years of drought conditions”. Most researchers believe that the decline of air pollution is a great factor of fog decline in Bakersfield. Knowing the amount of air pollution Bakersfield contains and being ranked the second worst city of air quality of California, there is an absolute, logical reasoning of less foggy weather and less fog delays.

You will think students would wonder about fog delays, how it is scheduled, and wished to experience school starting later on a foggy day. However, some students prefer less fog delays in order to save up hours for early outs. Alisa Galarza, a senior at Ridgeview High School, preferred saving the hours that are meant for fog delays for other usage. She quotes, “I rather avoid them because if we use up all of our fog delay hours, we can have the whole day off”. Another student who is senior at Ridgeview High School, Chloe La, says it is enjoyable to start school an hour later, until you realize you are taking away hours you could use as a free day. “I feel like they’re beneficial, but you have to pay the price for them later on. You are taking up hours and adding up to a full day of school”. Now it is up to the district to continue dismissing fog delays and use them for early outs.